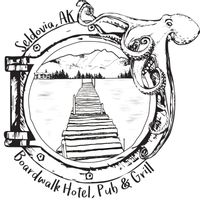 Seldovia is a city in Kenai Peninsula Borough, Alaska, United States. Its population was 255 at the 2010 census. It is located along Kachemak Bay southwest of Homer. There is no road system connecting the town to other communities, so all travel to Seldovia is by airplane or boat.

The native residents are mixed Dena’ina Indian and Suspiaq Eskimo (Alitiiq). In 1787 or 1788 a Russian fur trade post named Aleksandrovskaia was established at today’s Seldovia by hunting parties under Evstratii Ivanovich Delarov, of the Shelikhov-Golikov company, precursor of the Russian-American Company.[2]

Although there has been little definitive archeological evidence of human habitation at Seldovia prior to the 1800s, it is said the early Russian St. Nicholas Orthodox Church, started in 1820, was built on top of an older aboriginal Inuit village site. The town’s original Russian name, Seldevoy, translates to “Herring Bay”, as there was a significant herring population prior to rampant overfishing early in the 20th century.

Until the development of a more complete road system in Alaska, Seldovia was an important “first stop” for ships sailing from Seward, Kodiak and other points outside Cook Inlet. At one time Seldovia was home to over 2000 residents, but today fewer than 300 persons reside year round.

The town was one of many communities along the shores of Cook Inlet, already noted for having one of the most severe tidal movements in North America. Similar to the dramatic tides of Bay of Fundy, the Cook Inlet’s waters prior to 1964 would rise or fall 26 feet every six hours during the peak tides. After the Good Friday Earthquake on March 27, 1964, which registered 9.2 on the Richter scale the surrounding land mass dropped six feet.